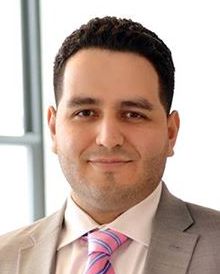 His termination yesterday follows an internal investigation and a complaint filed by a coworker last week.

“In responding to a complaint filed last week by an employee, we learned that Adrian violated our Code of Conduct by sending an inappropriate message to a colleague. This followed a recent reminder about our prohibition against inappropriate communications. We are saddened by these circumstances, but we take these issues extremely seriously. We’re committed to ensuring that BuzzFeed remains a place where everyone is treated respectfully by his or her peers,” BuzzFeed News spokesperson Matt Mittenthal said in an email statement.

In October, Carrasquillo appeared on a Google spreadsheet titled “Shitty Media Men” – a list circulating online drafted by a “whisper network” of women who were warning other women about alleged sexual misconduct of men in the media. The list, which wasn’t corroborated, was deactivated, but screenshots and even a YouTube video with the names on the document can still be found online. BuzzFeed also wrote about the list.

According to a company source, BuzzFeed conducted an investigation following the publication of the “Shitty Media Men” list. The company was unable to corroborate the more serious allegations, but allegedly found Carrasquillo engaged in a pattern of inappropriate communications and was given a warning to stop.

A coworker filed a complaint last week after Carrasquillo sent a message to several BuzzFeed colleagues, referencing one individual in particular. No details about that message were made available.

In a staff-wide email obtained by Newsweek, BuzzFeed’s editor-in-chief Ben Smith said Carrasquillo’s firing was not a “knee-jerk decision” and that the company acted to “maintain a respectful work environment.”

Carrasquillo did not respond to a request for comment.

Carrasquillo joined BuzzFeed as a breaking news reporter in 2013. A year later, he was named Editor of Latino Coverage. He moved to D.C. to become the news site’s White House correspondent in January.

Update: A day after publication of this story, and two days after his firing, Carrasquillo tweeted out an apology:

I deeply regret the crass & sexist attempt at a joke that led to my firing from BuzzFeed. I privately apologized to my colleagues & also want to apologize publicly to friends & colleagues this incident affected. I loved my time at BuzzFeed & wish everyone there continued success.