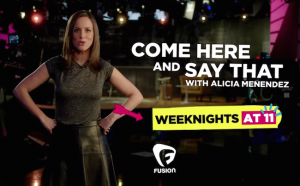 Fusion is revamping Alicia Menéndez’s show. It has killed “AM Tonight,” which aired at 9 pm since the cable network’s launch in October of 2013.

Starting tonight, Alicia Menéndez moves to a later timeslot with a new show called “Come Here and Say That.”

Airing weeknights at 11 pm ET, Alicia’s show is downsized to a half hour and will be taped in front of a studio audience. It will feature commentary, sketches and interviews.

“AM Tonight” was expanded to one hour in January and added Kim Gamble as Executive Producer.  She’ll be the EP for the new show.

Fusion has been undergoing a series of changes and downsizing since its launch as it struggles to gain traction. Just months after going on the air, it cancelled “DNA” one of its founding shows and reorganized “The Morning Show.” In March of 2014, it scaled back Jorge Ramos’ daily “América” to just once a week.

Over the past year, most of the network’s live programming has been replaced with documentaries and specials.

“Fusion Live,” the 8 pm daily newscast which started as “The Morning Show” at the time of the network’s launch, was cancelled in December.

It was replaced in February by “Nightline on Fusion,” a one-hour show with repurposed ABC stories hosted by Gio Benítez.

Fusion announced in February it was adding a live simulcast of ESPN Radio’s “The Dan LeBatard Show.”