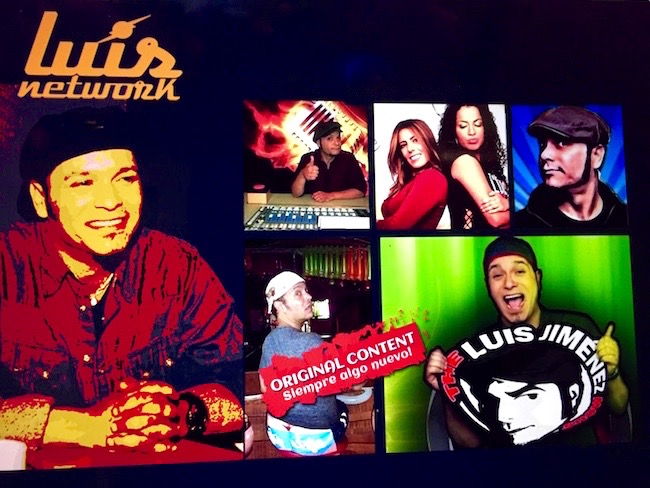 Popular radio DJ Luis Jiménez is kicking off the Labor Day weekend with the launch of his online radio venture, the Luis Network.

“The Luis Jiménez Show,” the network’s flagship show, debuts today – a Friday – at 12 noon ET and begin its regular run on Monday.

The 3-hour show will air live Monday-Thursday online from 7 to 10 am and be available as downloadable podcasts, allowing his fans to listen on-demand. But they’ll have subscribe to listen in. They can an opt to pay $5.99 a month or $50 a year.

To jump start fan interest, people who sign up before September 11 get a 7-day free trial.

According to Luis, the channel will be available on Roku, Apple TV and Kindle platforms. And soon, it will also be downloadable via Android and Apple apps.

This online venture puts Luis and his wife Alma, who is his show’s executive producer and on-air talent, in the driver’s seat. Owning the network will allow Luis to speak his mind without restrictions, controlling the content and the revenues.

Luis has been off the airwaves since July, when he parted ways with SBS, only 6 months after starting “Sin Censura con Luis Jiménez” at the radio network’s 93.1 FM in New York. He previously spent 14 years at SBS’ La Mega 97.9 in New York, which aired his hit show “El Vacilón de la Mañana” from 1994 to 2008. In between SBS gigs, he was with Univision’s WXNY 96.3 FM.

In an interview with Media Moves, he opened up about the rocky year he has had with Univision’s canceling of his show, his return and departure from SBS and his online venture plans.

What happened with SBS?

I started working on Luis network project last year and I spent months negotiating with SBS about it, but couldn’t reach an agreement. It’s nobody’s fault in the end. SBS has other interests and thought this would be competition for them…. I decided just to do this. I’ve been approached to do a syndicated radio again, but I really want to have control over my show.

What can you share about Univision canceling your show last year?

In the end, with today’s programming you get in trouble for opinions – not just using curse words on the air. I’m not a family program and Univision sees itself as a family company. I was too risky for them. Unfortunately, nowadays, radio programming is controlled by corporations and lawyers.

Why did you decide to go your own route?

I realized that talent can do their own thing because of the internet and it got me thinking. Radio has an obsolete business model. Digital, online, apps… that’s how people are listening more and more. I will have total independence with my own network.

How did you set up the network?

Alma and I are the owners. The other team members get a salary and we’re offering them a platform and support if they want their own shows.

What other programming are you planning for the Luis network?

We’re starting strong with the “Luis Jiménez show” and once we settle in, we’ll be doing a one hour webcast, where we’ll offer a video summary at the end of the week of whatever we talk about in our show.

Alma eventually is going to do a show called ”What’s up with Alma.”

We’re also about to start producing “El Showman” – a TV series. It will be an 8 episode comedy about a character I have called ”Nazario” – a lounge singer who’s a big star that doesn’t shine a lot. Once we get that going, then we’ll move to other projects for the network.

Do you think your fans will be willing to pay to listen to you?

Before charging people, I asked my audience and advisors. They all said they feel part of something as members, as part owners.

This is the only way we can provide the control people are used to and let them listen whenever they want.

Now people can download the show. It’s convenient. Not only that, we’re going to make sure we have direct feedback. We’ll be reading all their emails and comments. They’re our clients now.

How large an audience do you expect to attract?

When we were syndicated on Univision radio, we had a few million people listening – between 1.9 to 2.3 million in 12 markets. Hopefully, if I get 10% of those 2 million, it’ll be good for us. We always had really good numbers online – we were #1 in Uforia.

Will there be anything different about your show now? What can fans expect?

One of my main concerns is that people will think I’ll be totally uncensored. Not really. We have a style… if I have to use a bad word, I won’t hold back. I want to talk to people as if we’re friends. I won’t be cursing or going raunchy just because.

But I’ll say whatever I feel comfortable with. I have very controversial opinions. I’m a realist. I won’t be afraid of expressing what we want, which is why most people get fired on the air today.