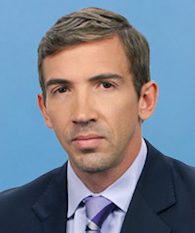 Attorney turned reporter Alonso Castillo has left KSTS Telemundo 48. He is moving to Washington D.C., where he’s looking to pursue other opportunities.

“I believe that being in the nation’s capital at this historic moment will allow me to continue developing in the political arena, where I have been growing for the past years,” Castillo tells Media Moves.

He joined KSTS in April of 2014 as an investigative reporter and multimedia journalist, brought on board to launch the “Telemundo Responde” consumer protection unit in San Jose.

During his time at the Bay Area station, he also spearheaded the “Yo decido” political multi-platform coverage of the elections.

“Working in Telemundo has been a great experience and an amazing opportunity. I leave this station with more skills and experience that gives me the tools to take the next step in my career,” he says.

Before his move to San Jose, Castillo worked as host of “Washington in Vme” and as a special correspondent for “De Buena Fuente” for V-me network in Miami.

A former corporate attorney, Alonso decided to leave law to practice journalism. He started as a correspondent for Reforma newspaper in Mexico before moving to Miami, where he began his broadcast career.