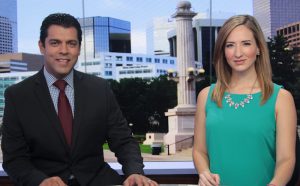 KDEN Telemundo Denver is expanding the responsibilities of its local news anchors.

The station announced it has tapped Carlos Rausseo and Pamela Padilla to co-anchor Noticiero Telemundo Denver a las 4 PM, which launches next Monday, September 26.

Pamela joined Telemundo Denver as an MMJ in February of 2015 and was promoted to weekday anchor in November. She previously spent two years as a web editor at KXTX Telemundo 39.

Carlos arrived to Telemundo Denver from rival Noticias Univision Colorado in 2011 as a video-journalist, producer and back-up anchor. He was promoted to sports anchor in 2014 and was named primetime anchor earlier this year.

Telemundo Denver is one of 14 Telemundo-owned stations adding a new 30 minute newscast.